Verdict from 8.1 hours of research from the internet

1 reasons not to buy

Compliment after compliment litter the review pages of the Adidas Predator 18.1 Firm Ground cleat, and it’s no surprise why. The cleat more than delivered regarding comfort, fit, and durability. Featuring a synthetic Controlskin upper which ensures optimal control while providing comfort. The Primeknit sock also adds to the overall comfort of the cleat. There’s one catch though; the price is quite steep as the pair is part of the top-tier offering of the brand.

SportsShoes, Zappos and 20 other shops don't have user reviews 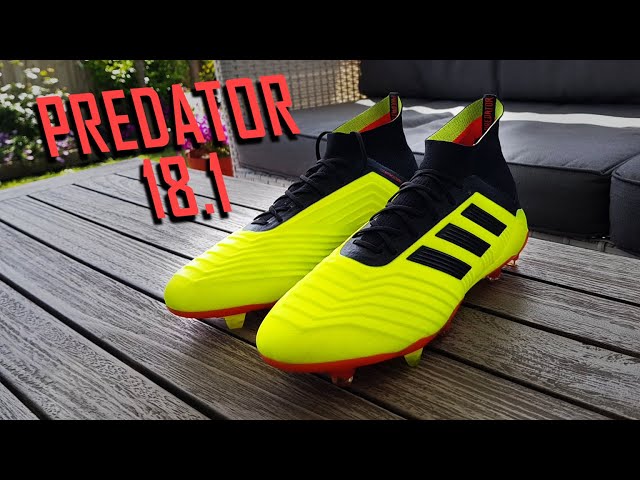 Adidas have had great success with the Predator range after reviving the popular boot silo. A complete overhaul of its design has modernized the Predators.

While previously created with a rugged and powerful form factor, the new iterations are sleek and streamlined featuring flashes of the Predator's aggressive heritage. The visuals are not the only upgrade that the German sports brand has packed into their boots. Current Adidas technologies such as the Primeknit and Control Skin have made their way into the Predator 18.1 design.

We got our hands on the Predator 18.1 in the vibrant solar yellow colorway as part of the energy pack Adidas released for the 2018 World Cup. This is an old school color combination that has been a fan favorite from the previous Predator generations.

So it is a very welcome and visually appealing color combination. The aesthetics are also boosted by the large three stripes branding on the lateral side of the boot, coupled with futuristic raised ridges covering the upper.

The boots fit me true to size based on Adidas sizing. I have regular sized feet, and I wear a size 9 US with Adidas but a 9.5 US with Nike. I did struggle to get my foot into the boots initially, due to the Primeknit collar.

However, after experimenting with it, I determined that the best method was to hold the collar on its sides, then stretch it while pushing my foot into the boot. It also helped to use my thumb as a shoe horn when doing this.

The boots are tighter when it comes to fit. The first time I wear them, I really liked the locked down type feeling the boots had around my feet. It was the right amount of tightness that still felt comfortable without sacrificing the quick responsive feel.

The boots were not exactly "lightweight", but I think they have the right weight to them.

The upper of the Predator 18.1 is made of a material called the Control Skin. The best way to describe the feel of the Control Skin is like a very high quality and a soft layer of sponge. It feels very premium with a smooth surface finish.

Along the front and medial side of the shoe, Adidas has placed an array of raised ridges. These are designed to allow for an improved and cushioned touch on the ball. I thought the padding on the upper was also well suited for passing and shooting, with the raised bumps helping to pack a punch.

Under the control skin is a layer of Primeknit that is visible around the collar area. The soft and stretchy Primeknit felt very comfortable and seemed to adjust to the shape of my foot as I moved around in them.

The collar around the ankles didn't feel "restricting" at all, and in my opinion, it is one of the best boot collars on the market.

It was not the most flexible outsole I have tried, but I thought it felt stable and provided great support. The stud pattern was well balanced and felt great for sprinting, turning and multi-directional movements.

Overall, I think the reincarnation of the Predator 18.1 was a big success. These boots had great expectations to live up to due to its famous Predator name.

Although it is far from the original design, Adidas have done well to incorporate modern technology such as Primeknit to create a well-balanced football boot that can help enhance a player's strengths on all fronts.

Even though they have a relatively high price point, I think the Predators would suit a player of any position, so I highly recommend you try them out for yourself.

Yazdan Ibrahim | Level 1 expert Verified
My name is Yaz and I have been playing football since I was 6 years old. As I have moved around a lot while growing up, I have gotten to experience playing in many different environments and conditions in countries such as my home town in the Maldives, in Canada and New Zealand. I have played almost every position in football, starting out as a left back and moving up the pitch from a winger to a striker. Some of my playing highlights include winning the MVP award for my school team in 2011 and winning a 5-aside tournament in 2013.

The Adidas Predator 18.1 FG cleat brings with it a comfortable, sock-like fit. Additionally, a central lacing system is present for a more personalized fit. Other Adidas models with this customizability feature are the Predator 19.1 FG as well as the Predator 19.1 Trainers.

The upper of the Adidas Predator 18.1 features Controlskin technology. Giving a thicker feel than a traditional Primeknit upper, it ensures optimal cleat control and has a soft, comfortable feel and. Primeknit is featured in the cleat’s collar which also extends to the toes. While adding comfort, it also provides foot support but lightweight.
Additional control in the upper comes in the form of Non-Stop Grip on top of the upper.

Controlframe technology can be found on the outsole. This type of construction creates stability during fast play. Aiding rotation as well as grip, Hybrid studs are featured. Of course, the construction is designed for maximum performance on Turf surfaces.

A heel counter is also present to reinforce lockdown.