Verdict from 7.8 hours of research from the internet

Taking over the reins held by the GOrun 6 model, the GOrun 7 from Skechers aims to improve performance through heightened in-shoe security and an emphasis on attaining a smooth stride. A one-piece opening with pull tabs on the front and back fo the collar encourages quick and effortless donning and doffing. Also, focusing on a supportive yet lightweight and flexible ride contributes to an agreeable time on the roads.

SportsShoes, Zappos and 20 other shops don't have user reviews 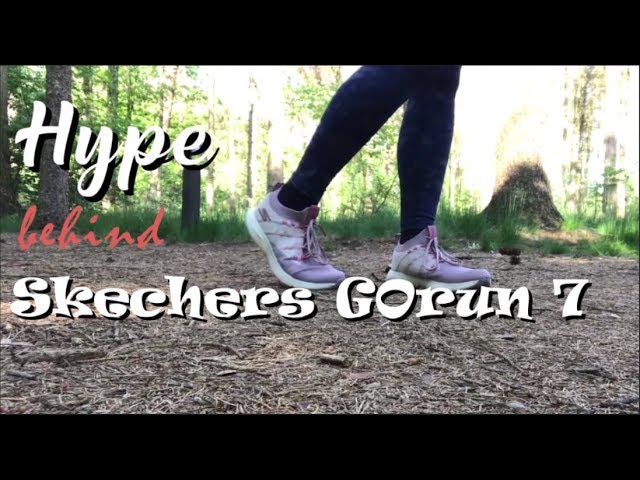 I’ve been wearing Skechers running shoes for years, ever since I started running five years ago. They were the first brand of running shoes I owned and the GoTrail Ultra 4 is still one of my favorite running shoes of all time (I have owned 4 different pairs of those).

But other runners have often reacted in surprise when I mentioned Skechers in the same sentence as running shoes. A lot of people assume that a brand like Skechers couldn’t make decent running shoes, even though I tried to convince them otherwise.

Everyone was raving about the midsole and some even claimed it was better than Nike, maybe even better than the Vaporfly 4%, which for running shoe geeks is quite the claim. So, I obviously wanted to try them for myself and see what the hype was all about all of a sudden.

The Razor 3 Hyper has speed written on the side and since I’m everything but a fast runner, I decided to order a pair of the new GoRun 7 Hyper, which is Skechers second model with the Hyper Burst material.

The GoRun 7 Hyper has a 13 mm forefoot height and a 17 mm heel height, giving it a 4 mm drop, like basically all the Skechers Performance shoes.

But due to the new midsole material and the knit upper, the shoe is super light. It only weighs in at 185 grams, which is 10 grams less than the Nike Epic React Flyknit 2.

The GoRun 7 Hyper has a one-piece knit mesh upper. I’m not a huge fan of knit uppers, on the one hand, they do mold to your foot, but there are often also fewer options for adjustments.

There often aren’t any extra eyelets to adjust the laces and if you lace them tightly the fabric often folds over itself, which isn’t that comfortable since the fabric is quite snug.

This is also the case with the GoRun 7 Hyper. You can’t really adjust the laces that much and you can’t lace them very tightly.

It has a lockdown webbing lacing system to provide some support, but it isn’t much. The end of the webbing is also used as the eyelets to put the laces through.

I was surprised by how stretchy the knit fabric of the toe box is. I like it when the fabric on the toe box stretches since it gives your toes enough room to splay.

The most impressive feature of the GoRun 7 Hyper is the new Hyper Burst midsole material. Hyper Burst is a lightweight foam that is supposed to be not only durable but also very responsive. This midsole material is based on EVA, but is produced in a different way.

Normally EVA is blown into shape, but Skechers heats the foam under pressure which creates a new kind of material which is more durable, lighter and more springy than regular EVA.

The Hyper Burst material does keep its shape better than the Nike Zoom X foam. The Zoom X foam flattens a bit when you land on it and then returns to its original shape when you toe off.

This shoe doesn’t have that much of an outsole. There are some rubber pillars on the outsole to provide some traction, but the traction is kind of lacking when the road gets a bit wet.

I’ve struggled with the fit of these shoes. Lengthwise they are the right size for me, but in general, they feel a little too big. I’m not sure if I could have gone half a size down or not.

They also do not have the most stable upper. I’ve tried lacing them really tightly, but that means the knit folds in on itself, which creates a pressure point. I’ve also tried double lacing them through the webbing system as I’ve seen some people do, but that didn’t make it more comfortable.

I also tried to put in another insole on top of the one that was already there, but that wouldn’t leave me with enough room in the toe box.

The midsole Hyper Burst material does have quite a high energy return, but the shoe is lacking in stability.

The knit upper does not lock your foot down enough nor does it provide much stability, which also makes it difficult to make sharp turns in this shoe. Because your foot isn’t locked down enough it starts sliding over the midsole when you make a sharp turn, which then slows you down.

I can understand the hype around the Hyper Burst material. I do really see the potential in it. The most popular midsole material used to be Boost from Adidas, now it’s ZoomX from Nike and in a few years, it might be the Hyper Burst from Skechers.

They might be able to turn the running world upside down after all. You could really make a great shoe with this material, but you really need a different upper to do so. Luckily, Skechers is releasing more models with the Hyper Burst midsole later this year, so I’m looking forward to those.

Marijke van den Hamer | Level 5 expert Verified
I’m Marijke, on social media also known as Heart Runner Girl. I love trying new things and inspiring others to get moving. I’ve started running in 2014 and I run races all over the world. My favourite distance is the marathon, but I also run shorter distances. I’ve ran the Berlin Marathon in 2017 and the Paris and New York Marathon in 2018. My goal is to one day become a six-star finisher.

The Skechers GOrun 7 was constructed using the standard measurements. When it comes to size, the available options are full and half-sizes for both the men and women’s versions. Widthwise, D – Medium, and B – Medium are the variants.

Runners are advised to try the shoe first or get ahold of feedback about the size and fit to achieve a pleasant in-shoe experience.

The contact points of the forefoot and heel are covered by rubber pods. These areas are designed to always have an adherence to the ground, whether merely standing or transitioning through the gait cycle. Wear-and-tear is averted because of such a covering.

A pattern that consists of tiny rectangular bumps heighten the traction capacity of the rubber exterior. Runners who value surface control and precise movements over the asphalt are the ones who can find such a detail highly lucrative.

Between the protruding and rubber-sheathed contact points are flex grooves. These trenches are designed to make the cushioning unit as flexible as possible. The bending of the toes as they gear themselves for the toe-off phase can use such a feature to generate more oomph to the performance.

The HYPER BURST is a midsole technology that runs the entire length of the Skechers GOrun 7. This feature is tasked with providing support against impact shock while also giving energy during the forefoot lift. It has been touted to be lightweight and long-lasting.

M-Strike is a term that is used for the midfoot striking zone of this Skechers running shoe. The middle part of the foam midsole has a slightly angled construction to encourage forefoot or midfoot landing. Such a stepping technique is a means of speeding up the performance of the foot while also mitigating any discomfort from the foot-strike.

An insole is placed right on top of the midsole unit. This add-on offers extra cushioning for the underside of the foot. It can be removed or replaced with the new one if the runner wants to do so.

The upper unit of the Skechers GOrun 7 uses engineered knit fabric, which is a lightweight and stretchy material that conforms itself to the shape and movement capacity of the foot as it takes each step. It has breathing pores which allow environmental air to enter the interior chamber and maintain a cool and dry ride. Knitted uppers are popular in many running shoes of today, including the running-fashion hybrid, New Balance Cypher Run.

A seamless construction has been utilized to mimic the feeling of merely wearing a sock. Such a feature aims to prevent hot spots or chafing.

This product doesn’t have a tongue unit. Instead, a one-piece opening graces the top of the façade, with a stretchy knit serving as its collar. The elastic nature of this wraparound entryway further solidifies the sock-like construction.

Fabric strands jut out from the sides of the silhouette. These filaments connect to the lacing system. When the fit is adjusted, the strands go along with the act. In-shoe wobbling is prevented when these things are doing their job.

Flat laces loop through the ends of the fabric strips. These thin laces are meant to tighten or loosen the in-shoe coverage. The stealthy ghillie placement and the lack of physical eyelet-reinforcements stave off skin irritation and hot spots.

Pull tabs are placed on the front and back of the one-piece collar. These loops are made to widen the stretchy collar even further, thus facilitating the foot inside, or out of, the compartment with ease.