Verdict from 4 experts and +100 user reviews

1 reasons not to buy

The Reebok ZPrint 3D was able to give quality service to many testers and reviewers. They appreciated its appealing looks, its responsive features, and its 3D-mapped platform. Many trusted this neutral shoe; one runner even planned on purchasing extra pairs.

I do triathlons, and I did it with Reebok since I started.

When I mentioned that, I accept that Reebok is not famous for super trendy running shoes nor do they merchandise the good ones they have (like my beloved and discontinued One Distance 1.0 or the underdog Sublite Sport).

They don’t have good reviews in those terms except the One Guide and the cross “gravel” ones. Therefore, those new models like the ZPrint 3D and the brand new running line from 2017 are like a running awakening with Reebok, or at least it looks like that.

So, first things first, the look. Those shoes are very good looking or at least through my eyes. They are new, aggressive and the sole is something I have never seen before, so I decided to try them.

I purchased the blue ones in size 41 (Europe), the weight was 270grams, and the price at the Reebok Spain web shop was 80€ (at that time).

Before having them, I could not decide which one should I take as there are there different models from this shoe - the standard Zprint 3D, the EX model and the WE model, and as I don't know what the differences are. I took the standard one.

Moreover, as I am a triathlete (or at least I try to), the shoelaces are always changed for elastic ones as is shown in the pics.

The outsole is pretty well made, and the mesh is flexible and elastic at the front, it seems it would allow the airflow, but we will see afterward.

The midfoot outsole is more hard and stiff, it would fix your feet automatically. It is based in two parts, one is the tongue/front outsole like a sock-type, and the rest is more stiff to bring stability to the whole shoe.

This sole is quite unique, I cannot remember this type of sole in any model right now but some Flynit models from Nike. Reebok sources detail that is a 3D printing schema.

At first sight, it seems hard and stiff but, as we will see afterward, is more comfortable than our first impression.

Those mini blocks are focused on balancing and helping at the mid- and front-foot step while running, as is shown in the picture. The mini blocks are not so frequent at the heel, so despite the cushion is ok, is much less than the front part.

We want to dedicate a couple of words to this part as the Zprint 3D shares this sock-fitting mode that trend right now. The point is that in our case, while it is quite comfortable, it is not so suitable for a triathlon.

One would have problems when you would introduce the naked and sweaty feet inside the shoes. If the triathlete, as I am, has wide feet, they would be tangled up with the lateral fastening point.

If you are going to run a half-ironman, where you can take time to put the socks on, these shoes could be quite interesting weapons to have in mind. That is if you keep the running technique until the end.

If you think that you won’t have those wide feet problems, we can recommend you to try them as you could fly in sprint and Olympic distances.

Note: We didn't check this model in a real T2 training yet.

Our data and impressions are based in normal runs/races, not yet in real fire situations.

Our first impressions were fulfilled from the very beginning.

The first runs with wide feet were not so comfortable as it is a little narrow and the midfoot section would feel a little stiff at the beginning. As a remark, this sensation lasted just a couple of runs, maybe 20-30kms.

After this point, you feel it even. The shoe perfectly adapts to your feet, not only along the feet (front to back) but even lateral (exterior to interior). It is not stiff anymore nor narrow. It feels like a big sock, even on the mid foot part.

The cushion is good and those two different parts that we mention with a picture at the beginning, help you to balance and step on much forward.

Anyway, this cushion is smaller on the heel section, and it's not recommended to run with those shoes if you step in at your heels first.

As you see on the picture, the shoe allows the airflow but is not a summer one like the ONE Distance 1.0, point for Reebok. You can run with these shoes all year long. We tested this pair during a Swiss winter (below zero °C), and we expect to do the same in a couple of months during summer.

We have done all kind of runs with these shoes, short/long, interval training and wet/dry ones and they react better than expected. The only "but" is that due to the 3D-printed sole, it is filled up with small stones when you run on gravel roads instead of asphalt.

We don't know if that fact would affect the durability as it happens in other shoes like the ones from the company ON for example. 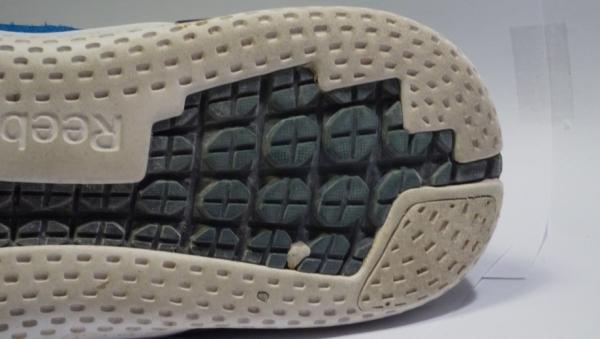 What is it recommended for

For 5-10km races.
For runners with narrow feet.

What it's NOT recommended for

For runners with wide feet or those who like to run without socks.
For runners who step in at the heel zone instead of a mid-front foot.

We would like to add in some comments regarding how we think this model would even be greater.

I have to say that the One distance 1.0 and Sublite models are my actual triathlon workhorses, the ZPrint 3D remains as my “Sunny Sunday’s good looking car.”

| Level 2 expert Verified
I am a former elite athlete who represented my country in two different sports at the highest level. Now I am living the tri-life in Switzerland since 2013. In a normal week, I'd run more than a half marathon and maybe ten times more on two-wheels, averaging at 20km weekly. I've finished more than 20 triathlons from sprints to half-ironman, road and mountain bike races, trails and running events without any DNF that I could account for. I apply my highest standards to my reviews and the products I test and I apply them always focused on the tri-sport.

The Reebok ZPrint 3D has a regular running shoe length. It comes in sizes that adhere to the standard measurements. Its semi-curved shape follows the natural curvature of the human foot. The available width is medium. It accommodates those with medium sized feet.


The outsole unit of the Reebok ZPrint 3D uses durable rubber. It covers the mid-sole and shields it from the abrasive nature of the asphalt.

Independent circular nodes are shaped in the outsole unit. They make the platform more flexible. Runners are able to move more naturally because of this design.

The platform is mapped using 3D technology. It essentially takes the natural shape of the underfoot, with a curved layout and a slightly narrowed mid-foot section.


The dual-density foam used in the Reebok ZPrint 3D provides reliable underfoot cushioning. It doesn’t limit the natural movement of the foot. It is able to attenuate landing shock and enable springy toe-offs. It is sturdy and long-lasting, too.

A foam insole adds a bit more cushioning to the underfoot. It can be replaced with a new one or removed entirely, depending on the preferences of the wearer.


Lightweight and sturdy, the engineered mesh offers reliable coverage to the foot of the runner. It is also breathable; it allows air to easily enter the foot-chamber in order to maintain ventilation.

Stitched overlays support the upper fabrics. They wrap around the foot securely, adapting to the tightening and loosening of the lacing system.

A pull-tab is placed in the heel area. It assists the runner when it comes to wearing the shoe and taking it off.

The current trend of Reebok ZPrint 3D.
Compare to another shoe:
Author