Verdict from 22 experts and +100 user reviews

3 reasons not to buy

The La Sportiva Bushido is a trail running shoe that offers a perfect combination of responsiveness, stability and comfort. You can expect adequate protection and traction from this shoe, especially when running on technical terrain. This is great for daily training and long distance runs.

I bought these back in November 2016 and only took them out for my first run in January this year.

I purchased these having a specific race in mind that I was hoping to use them for – the Transgrancanaria 125k, which has an elevation profile of more than 8000m and is known for its technical and rocky volcanic mountain terrain.

With the race taking place at the end of February, time was running out for me take the Bushido out for some test runs and to break them in.

Big in my decision to go with La Sportiva in general for mountain running, and Bushido in particular for technical terrain. But of course we all have to find out for ourselves.

Figure 1. The robust heel counter is typical of the tough build quality 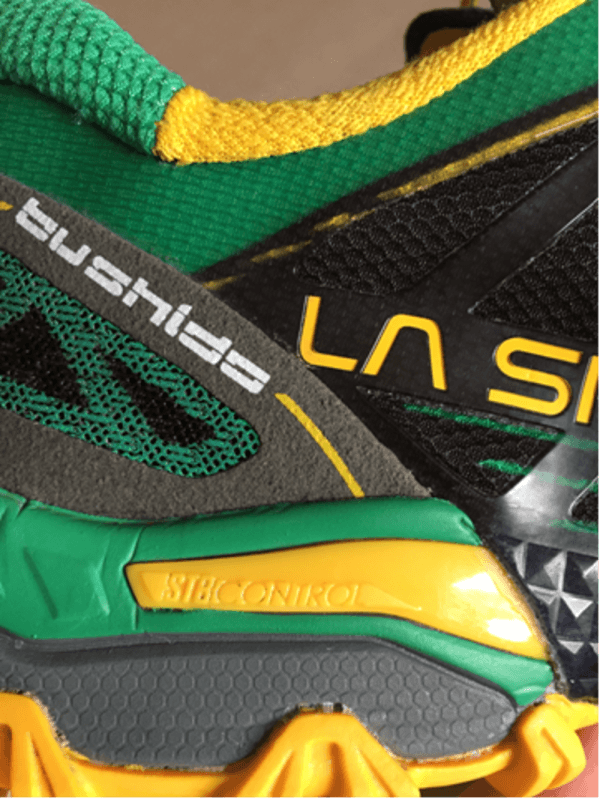 So off to the trails of North Downs Way just to the south of London I went, retracing the route of the 7.5 mile Boxhill Fell Race. The terrain was muddier and flatter than what I'd find in Gran Canaria but it'd have to do.

As I laced them up and got going, the words "bomb-proof" and "tank-like" came to mind. 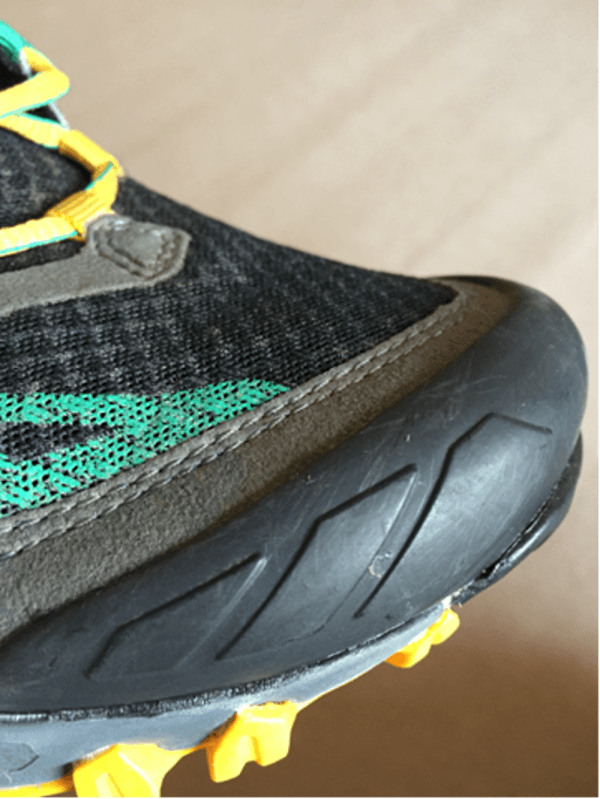 Militaristic for sure, but apt for a model named after the way of life of Japanese samurai warriors.

The fit was precise and the footing secure, in all but the sloppiest mud where nothing short of spikes will do anyway.

Out of the box the shoes feel stiff, augmented by the hard moulding around the midfoot, but this doesn't hamper the gait in any way.

I did experience a bit of heel slip on the right foot which led to my ankle sock being "eaten" into the shoe.

I wasn't too concerned though, knowing that my right foot almost always takes longer to adapt to a new pair of shoes due to its narrower heel, and the problem was fixed by tightening the laces a touch. 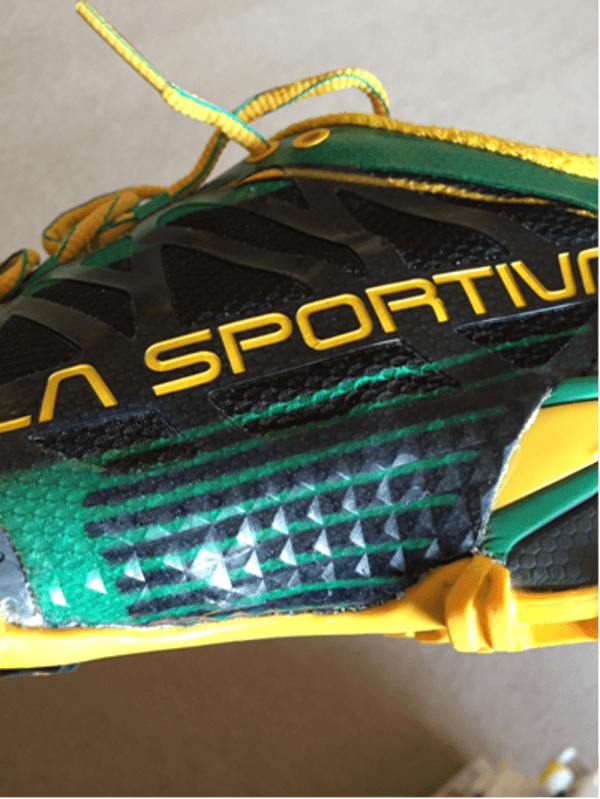 The next couple of runs over the weeks leading to Transgrancanaria were also mostly on soft terrain, with some sandy and rocky stretches.

With the longest run at 20 miles, the shoes felt comfortable enough and broken in enough that I headed to the race armed with only these and without a back-up as I normally do. 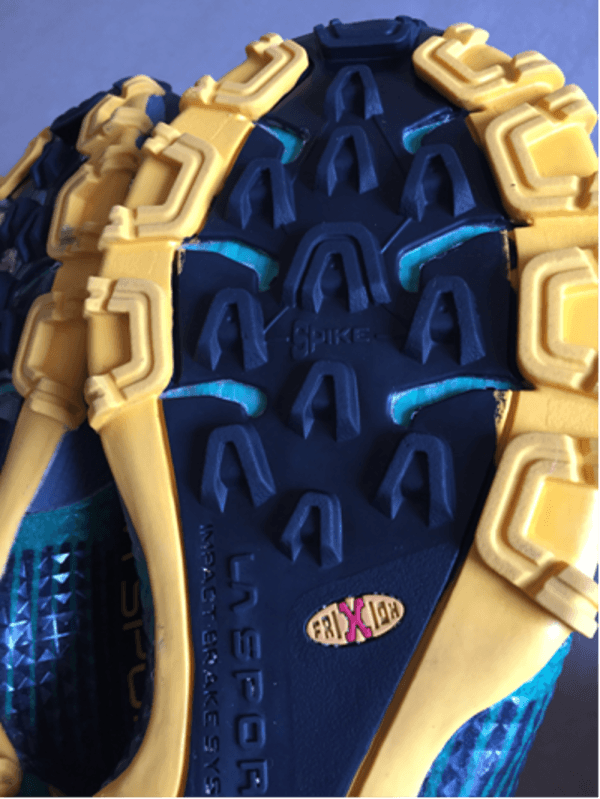 Gran Canaria is part of a 7-island archipelago sitting off the coast of West Africa.

Due to its mountainous profile which peaks out at just under 2000m near the center and prevailing North-easterly trade winds, the Northern half of the island tends to be wetter and more lush than the South, which is barren, dry, and rocky.

Transgrancanaria starts at the fishing port of Agaete in the North and ends at beach resort of Maspalomas to the South. 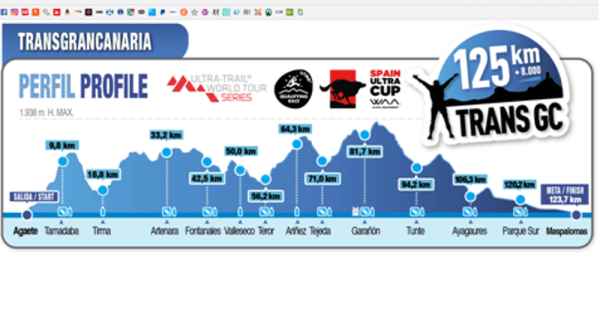 I finished the race in 25 hours 35 minutes, fairly comfortably within the 38-hour cutoff. I felt comfortable and confident throughout in the Bushidos and was particularly thankful for the robust toe protection for each of the dozen or so times that I kicked a rock.

I did slap on a Compeed blister plaster on the ball of each foot around the halfway mark but this was more of a preventative measure than due to any actual blisters.

To be sure, a blister or two would not be of surprise to anyone given the harsh, dusty terrain but I'm happy to report that the feet came away unscathed, which I believe owe as much to the snug wrap-around fit of the Bushido as anything else.

In sum, I'd happily turn to these again for mountain running in varied conditions and terrain, with bias towards dry and with loose rocks. Prior to starting Transgrancanaria I felt as if I was heading into battle.

With Bushidos at my side, I not only emerged alive but feeling victorious! 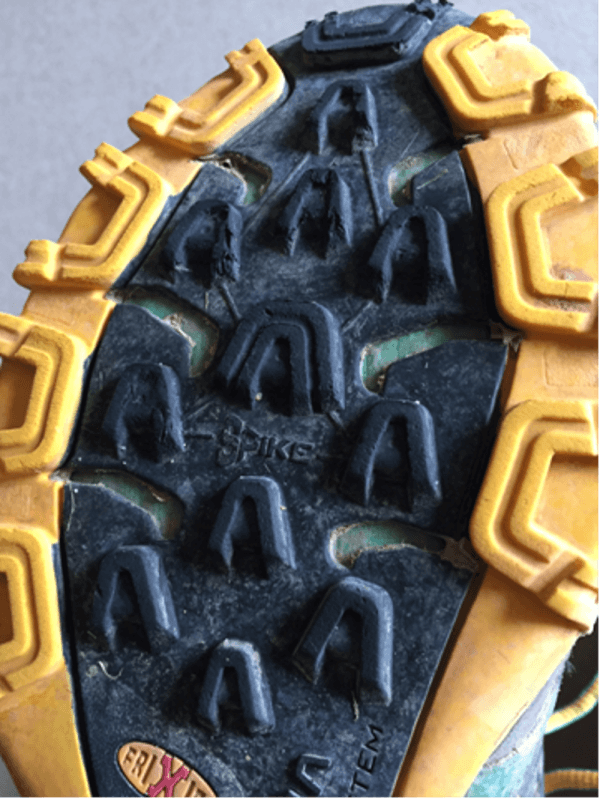 | Level 4 expert Verified
I am a runner. Running shoes are my tools of trade, and I take my tools seriously. I believe in the right tool for the right job and find joy in both the search for, and when matters come together to result in an enjoyable outing. Trail, road, 5k to 100 milers and everything in between- I've done them all!

The extremely sticky Frixion ST covers most of the outsole, except in high-wear areas as these are filled with the durable carbon rubber. A single glance at the outsole will impress even the most serious observers. The outsole features really prominent and utterly aggressive lugs. These lugs dominate the outsole, even the perimeter. Loose rocks, going up or down a hill, and technical trail running will all be a breeze in this shoe.

The full-length midsole called the Memlex is basically La Sportiva’s own version of a compression molded EVA for enhanced durability and responsive cushioning. Protection on the trail against bruises due to sharp objects is amply delivered by a Rock Protection Plate in the forefoot. This protection plate helps runners who want a stiffer form for powerful takeoffs.

Covering the upper in superior breathability is an open air mesh. The excellent ventilation of this shoe should ensure a sweat-free and really cool ride. Part of the protection on the trail is the TPU toe cap, which quite flexible despite being ultra-tough.

The STB Control or the smart and strategic use of new synthetic overlays enables runners a more luxurious and comfortable fit.

The current trend of La Sportiva Bushido.
Compare to another shoe:
Author