Verdict from 6.4 hours of research from the internet

With the Adidas Pulseboost HD Winter, runners are able to run rain or shine all year round. This neutral running shoe is crafted using Adidas advanced technologies to help enhance the runner’s efficiency under various conditions. It is designed to deliver a blend of comfort, durability, and performance.

Zappos, REI and 19 other shops don't have user reviews 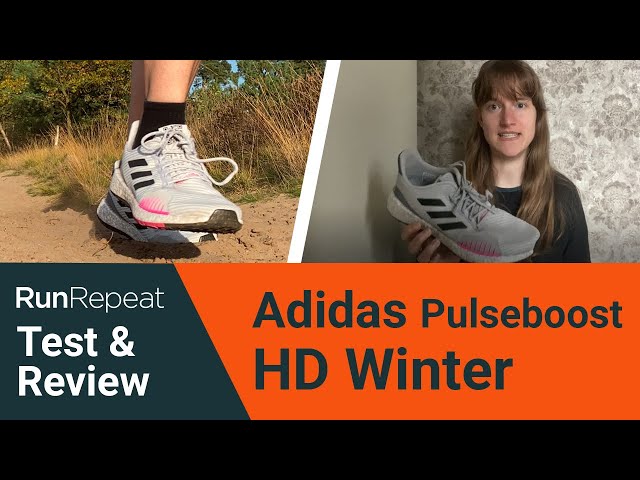 I’ve tried Adidas running shoes before, and Adidas is most famous for its Boost midsole material. I’ve tried both the Solar Boost and the Solar Drive before, which both have a Boost midsole.

Recently, Adidas came with Boost HD. No, not High Definition, but High Density. This sounded like a great idea; Boost is a great midsole material, so why wouldn’t you want more of it in the same midsole?

I actually think that’s a good thing. It’s great that most running shoes are very breathable, but when it’s freezing outside, so are my toes. So, I think it’s a good thing more winter shoes are being released.

The Adidas Pulseboost HD Winter is a road running shoe with a 10 mm forefoot stack and an 18 mm heel stack, which gives it an 8 mm drop. It’s a neutral shoe that weighs 290 grams in the women’s model, and it has a water repellent knit upper.

The Pulseboost HD Winter has a knit-like upper, but it is made of ballistic nylon, which is supposed to keep out most of the cold and some of the water and snow that comes with winter running.

Although on the outside, it is quite a rough knit, on the inside, it is a bit smoother. It does help with the cold, I’ve had other running shoes where my toes got really cold while running outside in colder conditions and I didn’t have that issue in this shoe.

The tongue and heel collar are slightly padded. The tongue is semi-detached, and most overlays seem to be glued onto the upper rather than stitched.

There is an internal heel counter which is enforced on the outsole of the heel, and there are enforcements on either side of the toes.

Instead of punched out eyelets, there is a nylon double-layered band stitched onto the upper of the shoe, and the laces are laced through the loops of the band. The laces are also pretty thick and rough and feel a bit like a rope.

Instead of pulling either side of the upper together over the tongue (like a regular lacing system), it is just pulling on the band, and it is making the fabric of the upper fold over on itself, which would create a hotspot.

So my only solution is keeping the laces a bit looser. The huge label on top of the tongue also isn’t helping with the lockdown. It’s difficult for the sides of the upper to slide over the label.

On the other hand, I do like the QR code that leads you to a Spotify playlist. I think that’s a nice little detail, but maybe they could have added that in some other way.

The midsole technology is made out of the Boost material. However, they’ve compressed them, which actually gives you a firmer and a stiffer midsole than a regular boost.

Some runners found the Ultraboost midsole to be a bit too mushy, and that’s why Adidas developed the Boost HD. There is still some bounce to the boost, but it’s definitely a lot firmer than the regular Boost material.

The outsole is something I’m probably the most impressed with, and that’s not something I often say about an outsole. It's quite a bit of Continental rubber, hence why this shoe is quite heavy, but it provides fantastic traction.

It’s made of continental rubber with some firmer rubber on the lateral and medial side of the toes. There are some square holes in the outsole to provide flexibility, which seems to work since the flexibility is quite good, given the full rubber outsole.

The midsole in appearance looks similar to the midsole of the Solar Drive. However, you can clearly notice a difference in the stack height.

The Pulseboost HD is much closer to the ground and has a firmer feel than the regular Boost in the Solar Drive.

With regular Boost, you sink into the material a little bit, and this gives you some bounce back when you shift your weight. That doesn’t happen with the Pulseboost HD.

The upper also doesn’t give much support, and I’ve had trouble locking down my foot due to the lacing system. Another difference with the Solar Drive where I can lock down my foot correctly, and there are guide rails on the medial and lateral side to provide some stability.

The Pulseboost HD feels a bit like they are already worn out before you’ve really worn them.

Boost HD is a completely different experience than regular Boost. It’s much firmer, and you don’t sink into the midsole.

Personally, I like a maximal soft ride, and the Pulseboost HD Winter is not, which isn’t that surprising if you consider the stack height. The feel of this shoe is more toward minimal cushioning, which isn’t really my kind of shoe, but there were still things that I liked about the ride.

The traction of this shoe is really good, and I liked that it kept my toes nice and warm in colder conditions. If you like a more minimally cushioned ride with more ground feel, this could be a good shoe for you.

Although you might want to consider going half a size down since the shoe is a bit roomy, and the lockdown isn’t great. Probably best to go try them on in different sizes before you buy them.

Lastly, this could be a pretty good shoe if they added some stability and changed the fit. The shoe does look nice, and I did enjoy this shoe as a casual shoe to just walk around in when it’s a little colder outside.

Marijke van den Hamer | Level 5 expert Verified
I’m Marijke, on social media also known as Heart Runner Girl. I love trying new things and inspiring others to get moving. I’ve started running in 2014 and I run races all over the world. My favourite distance is the marathon, but I also run shorter distances. I’ve ran the Berlin Marathon in 2017 and the Paris and New York Marathon in 2018. My goal is to one day become a six-star finisher.

- The Adidas PulseBoost HD Winterized is an all-weather version of the Adidas PulseBoost HD. Both of these running shoes feature the Continental™ Rubber outsole for superior traction in both wet and dry conditions. These shoes also used the Boost™ foam midsole for a softer and springier ride. The only difference between these running gears is the material used in their upper units.

The Adidas Pulseboost HD Winter was manufactured using the standard shoe measurements. The lace closure system and moderately padded tongue of the shoe work together to provide a more customized and snugger fit. It is recommended to test the shoe first or utilize the user reviews before making a purchase decision to ensure a perfect fit.

The Continental™ Rubber in the outsole of the Pulseboost HD Winter enhances its performance under various conditions. This highly durable rubber material uses the same rubber compound used to make car tires. It is designed not only to provide maximum grip on both dry and wet terrain but also protection against injuries and abrasion.

The Traxion Rubber is also incorporated in the outsole of this running companion. This component improves the shoe’s grip and propulsion. It also offers reliable protection against tear-and-wear.

The Boost™ foam used in the midsole unit offers a good amount of energy return and stability. It features hundreds of visible energy capsules that store and release endless energy every time the foot hits the ground. Unlike the other ordinary foams, this material provides springier and softer cushioning feel. The Boost™ foam is also resistant to extreme temperatures and can last longer than the other traditional midsoles.

A ballistic nylon upper is incorporated in this running shoe. This component is designed to provide excellent comfort and protection in a variety of bad weather conditions. It is water-resistant yet highly breathable, enough to keep the foot dry and comfortable during light showers.

The sock-like upper construction provides supreme comfort and irritation-free fit, while the reflective detailing increases the user’s visibility during the night runs.

The tongue features a QR code that can be used to unlock an exclusive playlist once scanned.

Completing the upper is the traditional lacing system that allows the runner to customize the tightness or looseness of the shoe. It securely locks down the midfoot for a more supportive and comfortable fit.